I am determined to do whatever we can to make baseball more popular in the UK than it is currently. The MLB has a presence here and is doing its bit, it’s taught in some schools, I was surprised to learn and it’s sort of on TV here, but only twice a week in the middle of the night. Still that’s what digital video recorders are for and more to the point, that’s what MLB’s At-Bat application on the iPhone is for (£2.99 very well spent).

Anyway on Saturday me & the kids sought out one of the last remaining weekends of games in British baseball with the kids. Bar the first week we were here, which was very hot, it has been steadily downhill since then, weather-wise and this weekend was weather only the ducks could love. That said some very hardy souls braved the driving rain in lovely Croydon for the final four of the UK national championships.

As you can see on this pitch in a game that I think was between the London Mets & Menwith Hill Patriots, it was players, family & friends only. 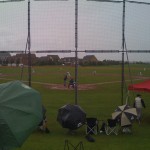 The Mets must’ve won as they went on the following day to win the whole shooting match, beating our local team, the Richmond Flames 11-4 in a one-game 9-inning final; it was too wet to play the best-of-three final they had hoped for.

Oh well it was an interesting, if underwhelming introduction to the game here for our family’s slugger, but I’m sure he can make an impact next season.

And of course let’s hope the real Mets do the business back in the truly big leagues – right now it’s looking good, but after last season’s astonhshing collapse, nothing will be taken from granted until game 162 is completed.